Canon Powershot A3150 IS

My camera is a Canon Powershot A3150 IS. As are all canon’s, it’s amazing. The zoom and macro are both incredibly good; perfect for close up shots. The overall design is a plain black, I didn’t want a fancy colourful camera, I wanted one that worked. And I got what I wanted.

It’s simple to use, especially for beginner photographers or just for taking pictures. But if you want to seem more professional, there’s lots of handy tools you can use on it too.

Things I hate. Go on, you won’t be on there.

Well. I think this might be the first rant of mushroomGalore. Here we go.

So, I’m not that crazy or weird, but some things might lead you to thinking I am. Like the following.

People who write “Would of” instead of “Would have”. Seriously guys? You don’t write would’f, hence the ‘ve’ on the end!

Sneezing, coughing, burping, farting etc around me. It’s gross. I mean it’s fine if I do it, but you? Nuh-uh. 😉

The self-obsessed, as I call them. The ones who only care what other people think about them, not the other way round.

Following orders. I find it so frustrating. I mean I should be the one up there, giving the orders.

Racism, racism and racism. Screw you if you’re racist. Go grow up.

Trance/Rave/Dance; whatever you want to call it, music. I hear it all the time. ‘In-sa in-sa in-sa’ , the constant sound of the bass.

Risotto, Mushrooms, Celery and various other foods. How about you list your least favourite foods in the comments? (;

I hope you enjoyed my rant. It’s probably not something you want to do on your at 6’o clock in the afternoon.

The Man who Mistook his wife for His Hat

I’m currently reading a book on psychological disorders called The Man who Mistook his wife for his Hat. It’s basically a book about strange happenings written by a neuroscientist. There are different cases and the first one is the one from the title. The man literally mistook his wife for a hat.

I haven’t finished it, I haven’t had a lot of time for reading. But, I really like it and I’ll try and post more about it in later posts.

For the summer holidays, I went to South Africa to visit my family. We went to a Botanical garden called Kirstenbosch (Kir-sten-bosh), and I came across a poem called Unexpected. I can’t remember the author, sorry!

Sculpted from ancient rocks and stream,
there’s a dream in me…
untamed.
Untamed,
it comes alive in my silence
and in the unframed manner of my waiting.
Awake, aware… it is there,
coiled, in the folding of my arms,
in the holding,
of my breath and in the deep,
wakefulness of my sleep.
A force of fire and clay.
It hunts along the edge of play
of hide and seek and turn away.
Body of sand and skin
to know this spoor.
Is to know the allure
of our gravid kin, three months here…
nine months there.
Always expecting, and always…
the unexpected.

Confused by the title? Well, let me explain.

Basically, now that I’m in Year 10 (I have no idea what grade/standard I’d be in if I was abroad, sorry.), we have this thing called work experience. This is where we go away from school for a week in summer to observe or work as a temporary intern at a certain shop or service. You go through the whole interview process, either by phone or email, personal viewing and others. You have to do this all by yourself, with (preferably) no help.

I have two choices at the moment. The local Police station is running it this year, and you get to shadow a Policeman/woman, go to court cases and more. Thing is, in the whole of my county, they’re only accepting 12 people over all. So, there’s a bit of competition.

Another choice is Manson’s Guitar shop in the city. It’s basically, a guitar shop where I bought my acoustic guitar. (It’s also Muse’s local retailer for guitars. They have Matt’s DeLorean hanging on a wall!)

At the moment, my class are sending off emails, calling services etc. Wish us luck! ;]

As you probably know, last Sunday was 11th September, 2011, 10 years since two airplanes were hijacked and smashed into the WTC (World Trading Centre) in New York. Roughly 3,000 people died that day.

I’m writing this post, devoted to those who died. The innocent civilians who were in WTC that day, probably some with families, and, especially the fire-men and the police who put in so much effort and their time into the rescue and clean-up oporations. Also, those service men who died.

My heart also goes out to the marines who died in the pentagon, where the third hijacked plane crashed.

And no-one can even forget those people who were on the plane and lost their lives.

To those people who lost friends, family and loved ones in the tragedy. I’m truly sorry.

Now, I was only 4 when this happened. My mum told me that my Uncle Michael was in America at the time, having conferences in different parts of America. She was worried, but soon we found out that his plane had been grounded and he had not been harmed.

Old Amy in “The Girl Who Waited” 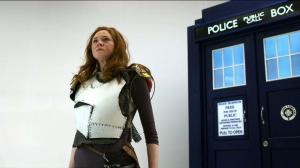 I really loved this episode. Old Amy was… awesome. Her outfit was so alien, but really space-age and futuristic. The setting; so cool. I was more creeped out by the whiteness and sterile environment of this episode than of the ‘scary’ dolls in the last episode!

And Amy herself. Well… where to start? She was brave, strong. She had made up her mind to hate the Doctor. She could fight amazingly and I was just so happy to see she was finally standing up for herself. Living for 36 years by herself really made her a independent person.

It was the perfect mix of romance, sci-fi and action. The best episode yet.

Is black a colour?

I was asked this in my RE class a couple of days ago, and I couldn’t help wonder.

Is black a colour?

I thought it was, and really, my opinion hasn’t changed a lot. But is it  just a shade? Or really a colour like green or blue? I imagine it is, since if you look at a colouring book for young kids (or 14 year old girls, like one of my friends), there is a black outline where you have to keep in the lines. Does that still make it a shade? Or does it make it a colour?

What do you think? I’d love to hear your thoughts. Reply in the comments.

¡Hola, amigos! I’m Tanitha, and I am also a new author on MushroomGalore (what an epic name!). And since I now have you utterly under my spell, I might as well tell you a little about myself.

I’m a teenager, and I love to read: mainly fantasy, sci-fi and adventure. I also write short storyletts. My home is hidden in the beautiful (but wet) english countryside. When I’m older I plan to go to med school and train to become a Doctor. If your intrested in reading some of my stories, or are just curious, check out my blog here. :]

Muse. Oh come on, you saw it coming!

The title is dedicated to my close friends, those who know I am completely obsessed of the band Muse, a band who I think are so original, so utterly brilliant, and so bloody amazing if you ask me.

I think, because they are so incredible, that you should have a chance to listen to them too.

The first song I will show you, Hysteria, is my favourite song, at the moment. Trust me, if you ask me one day, it’ll be completely different the next day.